The Names and Titles of Jesus – The Son of Man 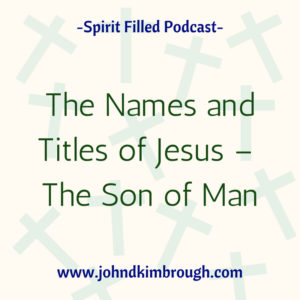 This series of the names and titles of Jesus will give us a more in-depth understanding of Jesus Christ our Lord. This is ninth in the series. This is one of my favorite classes. I certainly learned a lot putting it together and there has been a great reception to it. The following is an outline.

What name or title did Jesus purposely call himself more than any other?

The Son of Man- Jesus chose that title to refer to himself 50 times, not counting the times it is repeated in the gospel

Who is the Antichrist?

Many deceivers have gone out into the world, those who do not confess that Jesus Christ has come in the flesh; any such person is the deceiver and the antichrist! 2 John 1:7

40And the fourth kingdom shall be strong as iron: forasmuch as iron breaketh in pieces and subdueth all things: and as iron that breaketh all these, shall it break in pieces and bruise. 41And whereas thou sawest the feet and toes, part of potters’ clay, and part of iron, the kingdom shall be divided; but there shall be in it of the strength of the iron, forasmuch as thou sawest the iron mixed with miry clay. 42And as the toes of the feet were part of iron, and part of clay, so the kingdom shall be partly strong, and partly broken. 43And whereas thou sawest iron mixed with miry clay, they shall mingle themselves with the seed of men: but they shall not cleave one to another, even as iron is not mixed with clay. 44And in the days of these kings shall the God of heaven set up a kingdom, which shall never be destroyed: and the kingdom shall not be left to other people, but it shall break in pieces and consume all these kingdoms, and it shall stand for ever. 45Forasmuch as thou sawest that the stone was cut out of the mountain without hands, and that it brake in pieces the iron, the brass, the clay, the silver, and the gold; the great God hath made known to the king what shall come to pass hereafter: and the dream is certain, and the interpretation thereof sure.

Dan 7 12As concerning the rest of the beasts, they had their dominion taken away: yet their lives were prolonged for a season and time. 13I saw in the night visions, and, behold, one like the Son of man came with the clouds of heaven, and came to the Ancient of days, and they brought him near before him. 14And there was given him dominion, and glory, and a kingdom, that all people, nations, and languages, should serve him: his dominion is an everlasting dominion, which shall not pass away, and his kingdom that which shall not be destroyed.

27And the kingdom and dominion, and the greatness of the kingdom under the whole heaven, shall be given to the people of the saints of the most High, whose kingdom is an everlasting kingdom, and all dominions shall serve and obey him.

Jesus comes to earth calling himself The Son of Man and God bearing witness with miracles. – 50 times without counting duplication.
Jesus comes proclaiming the kingdom is at hand.
Jesus explains the nature of the inhabitants of the kingdom and the nature of the kingdom itself parable after parable – Many of these explanations are totally contrary to what they believed Daniel taught about the Son of Man and the coming kingdom.

Jesus begins to lay the bombshells that will destroy most of what the Jews believed about The Son of Man . The Son of Man is not just the Messiah, He is God.

Luke 5 The Son of Man is Devine

17And it came to pass on a certain day, as he was teaching, that there were Pharisees and doctors of the law sitting by, which were come out of every town of Galilee, and Judaea, and Jerusalem: and the power of the Lord was present to heal them. 18And, behold, men brought in a bed a man which was taken with a palsy: and they sought means to bring him in, and to lay him before him. 19And when they could not find by what way they might bring him in because of the multitude, they went upon the housetop, and let him down through the tiling with his couch into the midst before Jesus. 20And when he saw their faith, he said unto him, Man, thy sins are forgiven thee. 21And the scribes and the Pharisees began to reason, saying, Who is this which speaketh blasphemies? Who can forgive sins, but God alone? 22But when Jesus perceived their thoughts, he answering said unto them, What reason ye in your hearts? 23Whether is easier, to say, Thy sins be forgiven thee; or to say, Rise up and walk? 24But that ye may know that the Son of man hath power upon earth to forgive sins, (he said unto the sick of the palsy,) I say unto thee, Arise, and take up thy couch, and go into thine house. 25And immediately he rose up before them, and took up that whereon he lay, and departed to his own house, glorifying God.

Luke 12 The Son of Man is Devine

5Or have ye not read in the law, how that on the sabbath days the priests in the temple profane the sabbath, and are blameless? 6But I say unto you, That in this place is one greater than the temple. 7But if ye had known what this meaneth, I will have mercy, and not sacrifice, ye would not have condemned the guiltless. 8For the Son of man is Lord even of the sabbath day. 14Then the Pharisees went out, and held a council against him, how they might destroy him

Son of Man is the son of God and divine

Jesus begins to lay the bombshells that will destroy most of what they believed about The Son of Man.

13When Jesus came into the coasts of Caesarea Philippi, he asked his disciples, saying, Whom do men say that I the Son of man am? 14And they said, Some say that thou art John the Baptist: some, Elias; and others, Jeremias, or one of the prophets. 15He saith unto them, But whom say ye that I am? 16And Simon Peter answered and said, Thou art the Christ, the Son of the living God.
21From that time forth began Jesus to shew unto his disciples, how that he must go unto Jerusalem, and suffer many things of the elders and chief priests and scribes, and be killed, and be raised again the third day. 22Then Peter took him, and began to rebuke him, saying, Be it far from thee, Lord: this shall not be unto thee.

23And Jesus answered them, saying, The hour is come, that the Son of man should be glorified. 32And I, if I be lifted up from the earth, will draw all men unto me. 33This he said, signifying what death he should die. 34The people answered him, We have heard out of the law that Christ abideth forever: and how sayest thou, The Son of man must be lifted up? who is this Son of man?

Jesus begins to lay the bombshells that will destroy most of what they believed about The Son of Man .

His ascension and glorification and receiving a kingdom because of his death, burial and resurrection The Son of Man at His ascension is glorified and received the  kingdom

13“In my vision at night I looked, and there before me was one like a son of man, coming with the clouds of heaven. He approached the Ancient of Days and was led into his presence. 14He was given authority, glory and sovereign power; all nations and peoples of every language worshiped him. His dominion is an everlasting dominion that will not pass away, and his kingdom is one that will never be destroyed.

The ascension of The Son of Man

Jesus begins to lay the bombshells that will destroy most of what they believed about The Son of Man .

The Son of Man is now the Judge of all humanity

John 5 :27 And hath given him authority to execute judgment also, because he is the Son of man

57Those who had arrested Jesus took him to Caiaphas the high priest, where the teachers of the law and the elders had assembled. 58But Peter followed him at a distance, right up to the courtyard of the high priest. He entered and sat down with the guards to see the outcome. 59The chief priests and the whole Sanhedrin were looking for false evidence against Jesus so that they could put him to death. 60But they did not find any, though many false witnesses came forward.  Finally two came forward 61and declared, “This fellow said, ‘I am able to destroy the temple of God and rebuild it in three days.’” 62Then the high priest stood up and said to Jesus, “Are you not going to answer? What is this testimony that these men are bringing against you?” 63But Jesus remained silent. The high priest said to him, “I charge you under oath by the living God: Tell us if you are the Messiah, the Son of God.” 64“You have said so,” Jesus replied. “But I say to all of you: From now on you will see the Son of Man sitting at the right hand of the Mighty One and coming on the clouds of heaven.”[e] 65Then the high priest tore his clothes and said, “He has spoken blasphemy! Why do we need any more witnesses? Look, now you have heard the blasphemy.66What do you think?” “He is worthy of death,” they answered. • 67Then they spit in his face and struck him with their fists. Others slapped him 68and said, “Prophesy to us, Messiah. Who hit you?”

14Therefore, since we have a great high priest who has ascended into heaven,[f] Jesus the Son of God, let us hold firmly to the faith we profess. 15For we do not have a high priest who is unable to empathize with our weaknesses, but we have one who has been tempted in every way, just as we are—yet he did not sin. 16Let us then approach God’s throne of grace with confidence, so that we may receive mercy and find grace to help us in our time of need. 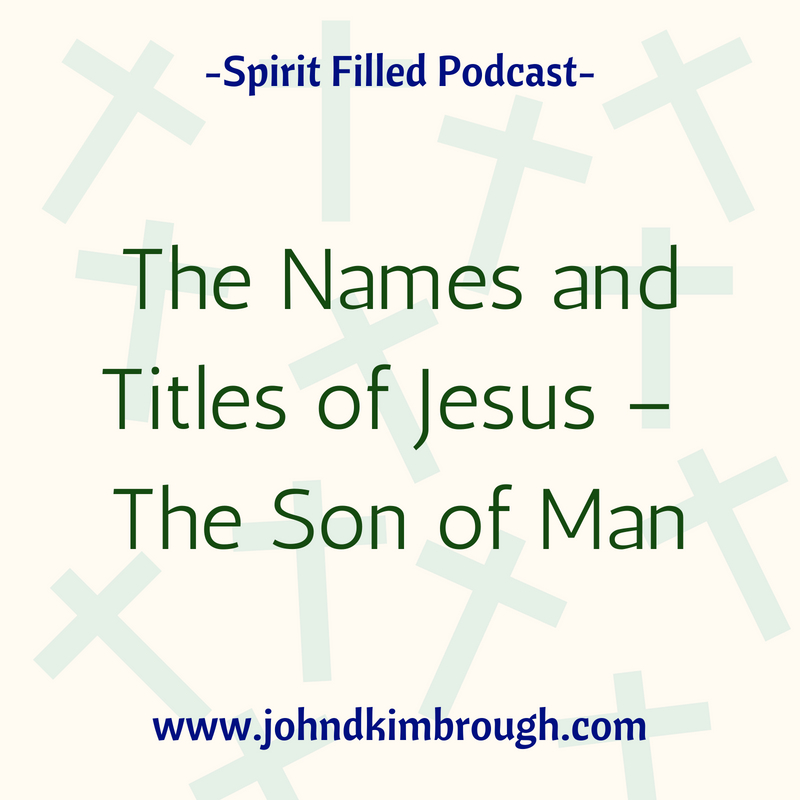 Article Name
The Names and Titles of Jesus –  The Son of Man Episode 100
Description
This series of the names and titles of Jesus will give us a more in-depth understanding of Jesus Christ our Lord. This is ninth in the series. This is one of my favorite classes. I certainly learned a lot putting it together and there has been a great reception to it.
Author
John D Kimbrough | Spirit Filled Podcast
Publisher
John D Kimbrough | Spirit Filled Podcast
John | No comments | Tags: bible, bible study, biblical, CHRISTIAN, Christianity, Christians, church, God, gospel, Jesus, Podcast, Scripture, series, spiritual, Spiritual Meditation, Spiritual Warfare