The Names and Titles of Jesus – Jesus the Resurrection and Life 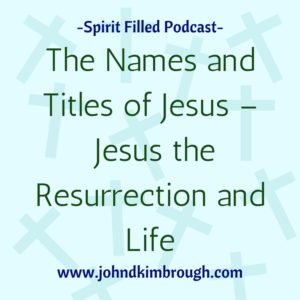 This series of the names and titles of Jesus will give us a more in-depth understanding of Jesus Christ our Lord. This is the fifth in the series. The following is an outline.

Ring around the roses, a pocket full of posies, Ashes, ashes, we all fall down

Genesis 3:19
By the sweat of your face you shall eat bread, till you return to the ground, for out of it you were taken; for you are dust, and to dust you shall return.”

Ecclesiastes 7:2
He says, …death is the destiny of every man
Romans 5:12 God used Paul to tell us, Therefore, just as through one man sin entered the world, and death through sin, and so death…  [like an uncontainable plague] spread to all men, because all sinned…

We ALL FALL DOWN
We are all terminally ill

Jesus had a lot to say about this enemy we all face. In fact, in His response to the death of his friend Lazarus, Jesus uttered another of His I am… statements…a statement that provides us with the answers the questions we all have when it comes to facing the inevitable end of our lives.

Perea, a two-day journey from Bethany – they just let Him know of Lazarus’ illness and assumed that He would come quickly

It took two days for the messenger to go from Bethany to Perea. Jesus tarried two more days in Perea after hearing of Lazarus’ illness. Two additional days were required for Him to reach Bethany. So the four days following the arrival of the messenger in Perea correspond to the four days Lazarus had lain in his tomb. That means as omniscient God in the flesh, Jesus knew His friend was already dead when He received the news from Bethany

As many people as possible attended these events

Deep mourning lasted for seven days during this week -it was forbidden to anoint oneself, to put on shoes, to engage in any kind of study or business and even to wash

Lord, if you had been here, my brother would not have died. But even now I know that whatever you ask from God, God will give you (vv. 21–22)

Jesus [says] to her, “Your brother will rise again.” Martha said to him, “I know that he will rise again in the resurrection on the last day” (vv. 23–24)

Whoever believes in the Son has eternal life; whoever does not obey the Son shall not see life, but the wrath of God remains on him (John 3:36).

For as the Father raises the dead and gives them life, so also the Son gives life to whom he will . . . Truly, truly, I say to you, whoever hears my word and believes him who sent me has eternal life. He does not come into judgment but has passed from death to life.

21For to me, to live is Christ and to die is gain.22But if I am to live on in the flesh, this will mean fruitful labor for me; and I do not know which to choose. 23But I am hard-pressed from both directions, having the desire to depart and be with Christ, for that is very much better;

LET’S PARTY WE HAVE ETERNAL LIFE

18He replied, “I saw Satan fall like lightning from heaven. 19I have given you authority to trample on snakes and scorpions and to overcome all the power of the enemy; nothing will harm you. 20However, do not rejoice that the spirits submit to you, but rejoice that your names are written in heaven.” 21At that time Jesus, full of joy through the Holy Spirit, said, “I praise you, Father, Lord of heaven and earth, because you have hidden these things from the wise and learned, and revealed them to little children. Yes, Father, for this is what you were pleased to do. Luke 10

We ALL FALL DOWN

25For he must reign, till he hath put all enemies under his feet. 26The last enemy that shall be destroyed is death.

But our citizenship is in heaven. And we eagerly await a Savior from there, the Lord Jesus Christ, who by the power that enables him to bring everything under his control, will transform our lowly bodies so that they will be like his glorious body.

See what great love the Father has lavished on us, that we should be called children of God! And that is what we are! The reason the world does not know us is that it did not know him. 2Dear friends, now we are children of God, and what we will be has not yet been made known. But we know that when Christ appears, we shall be like him, for we shall see him as he is. 3All who have this hope in him purify themselves, just as he is pure.

But someone will say, “How are the dead raised? And with what kind of body do they come? “You fool! That which you sow does not come to life unless it dies; and that which you sow, you do not sow the body which is to be, but a bare grain, perhaps of wheat or of something else. But God gives it a body just as He wished, and to each of the seeds a body of its own

Therefore, we do not lose heart, but though our outer man is decaying, yet our inner man is being renewed day by day. For momentary, light affliction is producing for us an eternal weight of glory far beyond all comparison,

17 And if children, then heirs; heirs of God, and joint-heirs with Christ; if so be that we suffer with him, that we may be also glorified together. 18 For I reckon that the sufferings of this present time are not worthy to be compared with the glory which shall be revealed in us.

Article Name
The Names and Titles of Jesus – Jesus the Resurrection and Life - Episode 96
Description
This series of the names and titles of Jesus will give us a more in-depth understanding of Jesus Christ our Lord. This is the fifth in the series. The following is an outline.
Author
John D Kimbrough | Spirit Filled Podcast
Publisher
John D Kimbrough | Spirit Filled Podcast
John | No comments | Tags: bible, bible study, biblical, CHRISTIAN, Christianity, Christians, church, God, gospel, Jesus, Names of Jesus, Podcast, Scripture, series, spiritual, Spiritual Meditation