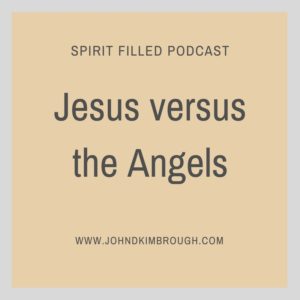 This is the fourth class on the book of Hebrews. This Bible class was taught at the Pilot Point Church in Pilot Point Texas.

Jesus versus the Angels

2.He made the worlds

3.He is brightness of God’s  glory

4.The express image of God

5.Upholding all things by the word of his power

7.Sat down on the right hand of the Majesty on high

SIDE STUDY ON ANGELS

ָאְלַמ The Hebrew word for Angel

“Where were you when I laid the earth’s foundation? Tell me, if you understand.Who marked off its dimensions? Surely you know! Who stretched a measuring line across it? Job On what were its footings set, or who laid its cornerstone while the morning stars sang together and all the angels shouted for joy?

And angels who did not keep their own domain, but abandoned their proper abode, He has kept in eternal bonds under darkness for the judgment of the great day.

There are too many to count Hbr12:22 But you have come to Mount Zion and to the city of the living God, the heavenly Jerusalem, to an innumerable company of angels.

Angels can not procreate or die Luke 20:36

Extremely powerful 2 Thess1:6-7, 2 Pet 2:11 …ThThinkest thou that I cannot now pray to my Father, and he shall presentlygive me more than twelve legions of angels? Matthew 26:53

They Have Super-Human Strength and Power (But Not Omnipotence)

2 Peter 2:11 … yet even angels, although they are stronger and more powerful, do not bring slanderous accusations against such beings in the presence of the Lord.

Psalm 103:20 Praise the LORD, you his angels, you mighty ones who do his bidding, who obey his word.

1 Peter 1:12 It was revealed to them that they were not serving themselves but you, when they spoke of the things that have now been told you by those who have preached the gospel to you by the Holy Spirit sent from heaven. Even angels long to look into these things.

Matthew 24:36 No one knows about that day or hour, not even the angels in heaven, nor the Son, but only the Father

They Have Super-Human Wisdom (But Not All Wisdom)

1 Corinthians 4:9 For it seems to me that God has put us apostles on display at the end of the procession, like men condemned to die in the arena. We have been made a spectacle to the whole universe, to angels as well as to men.

Ephesians 3:10-11 His intent was that now, through the church, the manifold wisdom of God should be made known to the rulers and authorities in the heavenly realms, according to his eternal purpose which he accomplished in Christ Jesus our Lord.

Hbr 1:14 Are not all angels ministering spirits sent to serve those who will inherit salvation?

Some have entertained angels unaware

Heb 13:2 Be not forgetful to entertain strangers: for thereby some have entertained angels unawares

Luke 7:24 And when the messengers of John were departed, he began to speak unto the people concerning John…

Luke 9 : 51 And it came to pass, when the time was come that he should be received up, he sstedfastly sethis face to go to Jerusalem,

52 And sent messengers before his face: and they went, and entered into a village of the Samaritans, to make ready for him.

Acts 7:30–35
“And when forty years were expired, there appeared to him in the wilderness of mount Sinai an angel of the Lord in a flame of fire in a bush. When Moses saw it, he wondered at the sight: and as he drew near to behold it the voice of the Lord [Yahwehin Hebrew] came unto him, saying, I am the God [Elohimin Hebrew] of your fathers, the God of Abraham, and the God of Isaac, and the God of Jacob.”

“Angel of the Theophany. This angel [MESSENGER ]is spoken of as ‘the angel of the Lord [Yahweh].’ The following passages contain references to this angel:

Case For A Theophany

The case for the angel of the LORD being a theophany, a temporary appearance of God in a SpSpiritody, is as follows:

In some contexts, the angel of the LORD is identified with God.

The angel of the LORD is said to have power to give life (Genesis 16:10). Only God has this power.

The quality of omniscience, or knowing everything, is attributed to the angel of the LORD (Genesis 16:13; Exodus 3:7).

The angel of the LORD is called the “Judge of all the earth” (Genesis 18:25). This is a title that belongs to God alone.

The Bible says that only God can forgive sin. I, I am He who blots out your transgressions for My own sake, and I will not remember your sins (Isaiah 43:25). Yet the angel of the LORD had authority to forgive sins (Exodus 23:21).

Worshipbelongs to God and Him alone. Yet the angel of the LORD was worshipped by Moses and Joshua.

No man has seen or can see God

Exodus 33:19-21 (NKJV)Then He said, “I will make all My goodness pass before you, and I will proclaim the name of the LORD before you. I will be gracious to whom I will be gracious, and I will have compassion on whom I will have compassion.” 20 But He said, “You cannot see My face; for no man shall see Me, and live.” 21 And the LORD said, “Here is a place by Me, and you shall stand on the rock.

1 Timothy 6:16 (NKJV)who alone has immortality, dwelling in unapproachable light, whom no man has seen or can see, to whom be honor and everlasting power. Amen.

Jesus is greater than  the  Angels  because:

Was there ever a prophet your ancestors did not persecute?They even killed those who predicted the coming of the Righteous One. And now you have betrayed and murdered him—53 you who have received the law that was given through angels but have not obeyed it.

Deuteronomy 33 :1-2(NASB) …“The LORD came from Sinai, And dawned on them from Seir; He shone forth from Mount Paran, And He came from the midst of ten thousand holy ones; At His right hand there was flashing lightning for them.

Psalm 68:17(KJV) The chariots of God are twenty thousand, even thousands of angels: the Lord is among them, as in Sinai, in the holy place.

Gal 1:8 But though we, or an angel from heaven, preach any other gospel unto you than that which we have preached unto you, let him be accursed.

Gal 1:9 As we said before, so say I now again, If any [man] preach any other gospel unto you than that ye have received, let him be accursed
Hebrews 1:4-5 4 So he became as much superior to the angels as the name he has inherited is superior to theirs. 5 For unto which of the angels said he at any time, Thou art my Son, this day have I begotten thee? And again, I will be to him a Father, and he shall be to me a Son?
He quotes 7 scripture from the OT to prove Jesus is greater than the Angels

Isaiah 9 6 For unto us a child is born, unto us a son is given: and the government shall be upon his shoulder: and his name shall be called Wonderful, Counsellor, The mighty God, The everlasting Father, The Prince of Peace.

Hebrews 1 6 And again, when he bringeth in the first begotten into the world, he saith, And let all the angels of God worship him.  7 And of the angels he saith, Who maketh his angels spirits, and his ministers a flame of fire.
Angels are servants!
Hebrews 1 8 But unto the Son he saith, Thy throne, O God, is for ever and ever: a scepter of righteousness is the scepter of thy kingdom. 9 Thou hast loved righteousness, and hated iniquity; therefore God, even thy God, hath anointed thee with the oil of gladness above thy fellows. 10 And, Thou, Lord, in the beginning, hast laid the foundation of the earth; and the heavens are the works of thine hands. 11 They shall perish, but thou remainest; and they all shall wax old as doth a garment; 12 And as a vesture shalt thou fold them up, and they shall be changed: but thou art the same, and thy years shall not fail. 13 But to which of the angels said he at any time, Sit on my right hand, until I make thine enemies thy footstool? 14 Are they not all ministering spirits, sent forth to minister for them who shall be heirs of salvation?

Comparing Jesus with the angels

They’re not
They never
Never
They serve
Ministering spirits

JESUS greater than the angels!